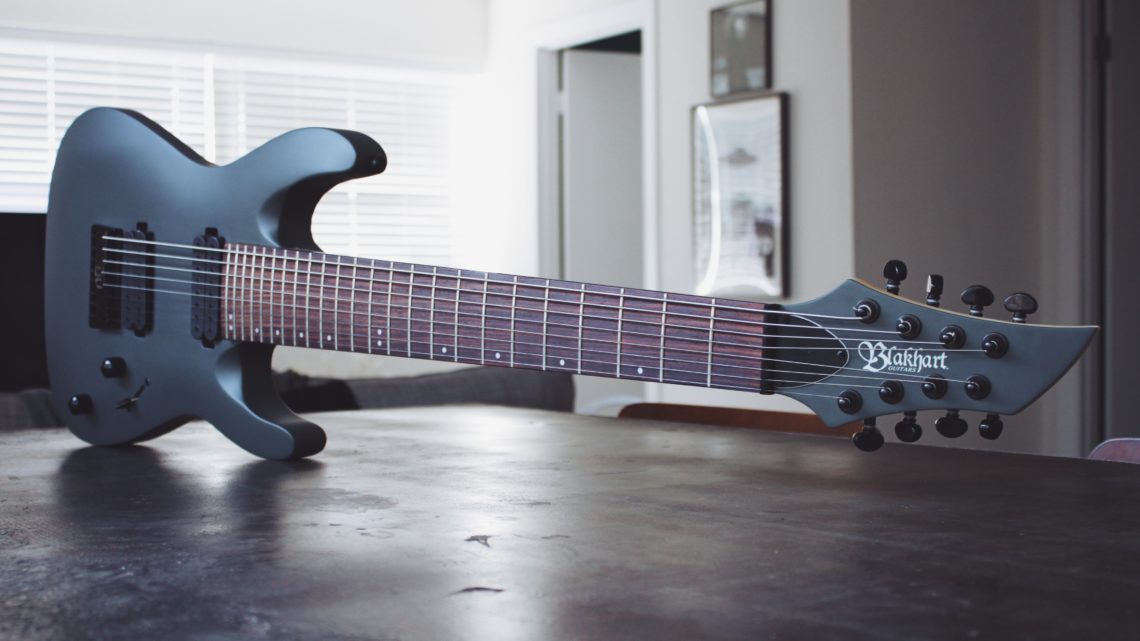 Blakhart Guitars is a brand I don’t know a whole lot about. A lot of their models are very clearly geared towards extreme Metal guitarists and remind me of B.C. Rich in some cases. They have a couple of noteworthy artists in their roster, like Steve Tucker from Morbid Angel and Mike Flores from Origin.

The first time I took notice of this brand was when people shared some mockups from their website, which looked like Jackson Guitars stock photos with the Blakhart headstock photoshopped on to the neck. That definitely looked pretty sketchy, to say the least.

About a year later, the brand announced Justin Broadrick from the mighty Godflesh as an endorsed artist and I was starting to get curious. He appeared to be playing the very guitar we’re trying out today: The BTK 888. A local friend let me borrow it for this review and I’m quite curious.

The BTK 888 comes in a Blakhart-branded, high quality case. Upon opening it, I think I’m looking at a Jackson. I’m not kidding – the body is almost virtually identical with the DKA8 I reviewed a while ago. It has the same shape, is also arched and features beveled cutaways just like the Jackson.

And it doesn’t stop there! The 1P maple neck and scarf-joint headstock construction are also very similar to the DKA8. The headstock shape is obviously different and so is the neck-joint, but I would not be surprised if someone told me the Blakhart was either built in the same factory or basically just modeled after a Jackson.

Both options strike me as odd, but looking through the lineup of guitars Blakhart have to offer, similarities with other brands don’t seem to be out of the norm for them. Some of the endorser photos on their website feature guitars with what looks exactly like the iconic ESP in-line headstock, so what’s the deal with Blakhart Guitars? I’m puzzled.

Let’s try and move on from here. I actually like the matte grey finish. It seems quite thick, but looks sleek and stealthy. The bridge is a typical non-branded Hipshot lookalike like ESP, Jackson, Schecter and others are using them as well. The rosewood fretboard has some nice streaking to it and the treble side offset dots are a cool touch.

Last, but not least, the BTK 888 comes with Grover tuners, which feel sturdy and precise. The BTK 888 seems like a workhorse that could really take a beating, but the attention to detail is no more than typical for an import guitar. The same can be said about the fretwork. No sharp fret ends or other issues, but they are not rounded off or anything along those lines.

This guitar is heavy! I’ve grown accustomed to lighter guitars so much that everything over a certain weight strikes me as a little uncomfortable at first. So a heavy guitar has to make up for its weight in a lot of other ways for me to consider it comfortable in the end.

Unfortunately the Blakhart doesn’t make it that easy for me. I can’t quite put my finger on it, but somehow the neck feels a bit clunky in my hands. It has very pronounced shoulders, which give it a pretty wide feel. The neck also feels a bit sticky for having a satin finish.

But the great setup with a nice, fret buzz-free low action makes up for all of that quite a bit. Navigating around the fretboard and playing fast runs comes pretty easy. The 27.5″ scale neck keeps the strings nice and tight. I tuned the guitar a half step down from F# to F and that is definitely the sweet spot in terms of feel.

I always feel like a scale length closer to 28″ works best for 8-strings. Depending on the guitar, a 27″ scale can work just fine for a low F, but the closer you get to 28″, the better. So it’s cool Blakhart went a little further than most companies with their production 8-strings and it pays off with a tighter low end response and feel.

Unfortunately the BTK 888 I am trying does not have the original Blakbucker 8 installed. Take that for what it’s worth. The owner replaced them with DiMarzio D Activators – a pickup I always liked. It sounds a little thicker in the mids than their 6-string counterparts, which makes for a punchy tone and attack without being muddy.

And in conjunction with the 27.5″ scale, the guitar sounds tight and clear. The heavy mahogany body resonates well, but doesn’t sound too warm. I’m surprised! I definitely like what I’m hearing. No complaints in the sound department.

Here are two clips for you:

The BTK 888 is definitely a bit of a mixed bag for me. The somewhat knock off-ish looks strike me as odd and seem kind of lazy. It’s hard to find out where this guitar was made, but it’s definitely an import model, not one of the very few hand-made customs Blakhart supposedly build each year.

According to their website, Blakhart Guitars is concerned with resource conservation as well as domestic animal and wild life welfare. I would appreciate if that would be more obvious with their guitars in some way. Is the BTK 888 made of sustainable or local tone woods and resources, for example? I certainly would love to know.

All that aside, this 8-string is way too heavy and bulky for my liking, but the playability and sound do make up for that a bit. I got used to the neck profile after a while – the low action and perfect string tension really helped with that.

UPDATE: Looking at these photos something jumped out at me that wasn’t that obvious to the naked eye. So I broke out some rulers and started measuring. Turns out the bridge of this guitar is crooked, which is a pretty unforgivable issue. I didn’t see it at first because the bridge pickup itself is mounted in the cavity slightly crooked. By some miracle, the guitar still intonates just fine and, like I said, plays well. But obviously it affects the rating.