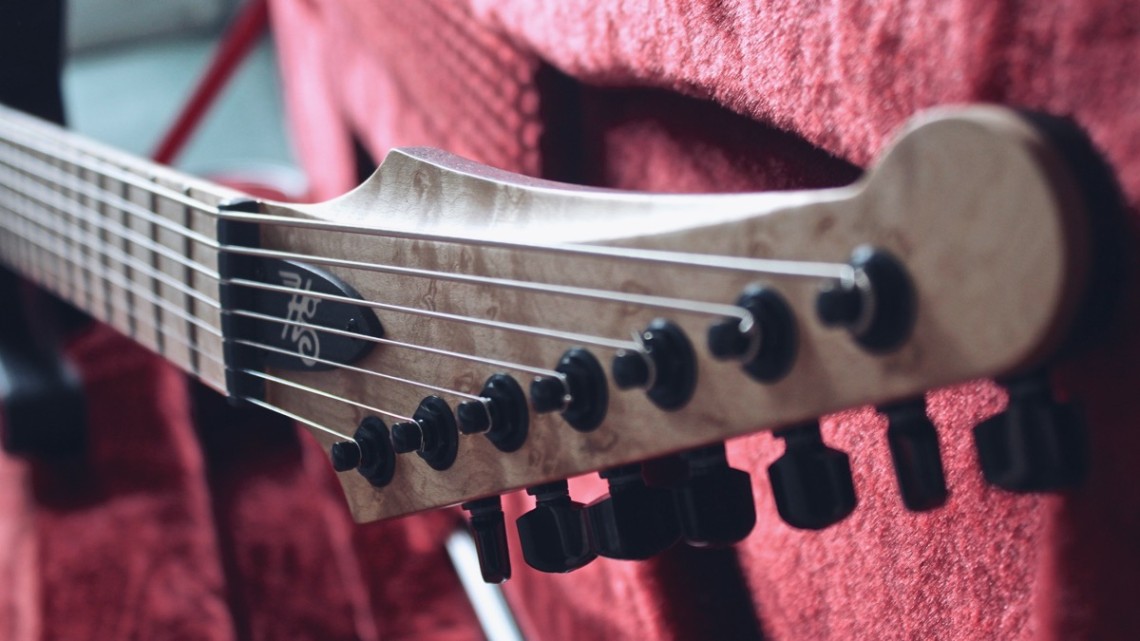 In early 2013, I got to know local Berlin luthier Robert/Hapas Guitars and after a little back and forth, we decided to design a baritone Telecaster-style 7-string together. Which were going to be two firsts for me: co-designing a guitar and having a custom instrument made.

Robert usually names the guitar models he designs with certain people after their names/nicknames, so we called our model “Sludge”. He started building some fanned fret models for customers, but I was only able to put in my order in 2014. Fast forward to last week, I went to Robert’s workshop, got to know his team and picked up my Sludge 727.

Let’s just get one thing out of the way: I chose the specs and finishing options for this guitar for a reason. I had a certain vision for it and luckily, it successfully came to life. So when I praise the great looks of this thing now, it feels like I’m patting myself on the shoulder. But it is what it is, this guitar looks great.

Robert’s black coal finish gives the Sludge an organic look and feel, while the recessed purpleheart pickguard makes for a classy, yet not exactly flashy contrast. And then there’s the neck. When I first saw the guitar in the flesh, I didn’t know what to look at first – the amazingly figured birdseye maple fretboard or the back of the neck, with the beautiful contrast of the maple skunk stripe in midst of the tightly-grained wenge. It looks like chocolate with vanilla sauce and makes you wanna take a bite straight out of it, haha.

The contrast of the fretboard against the wenge is just as delicious. Good thing it extends over the headstock with another birdseye maple cap that is pretty much the same thickness as the fretboard. This creates a binding-like look across the board and headstock. I actually opted for that to retain some of the classic Fender design elements, where the headstocks are usually matching the fretboards rather than the body/finish. 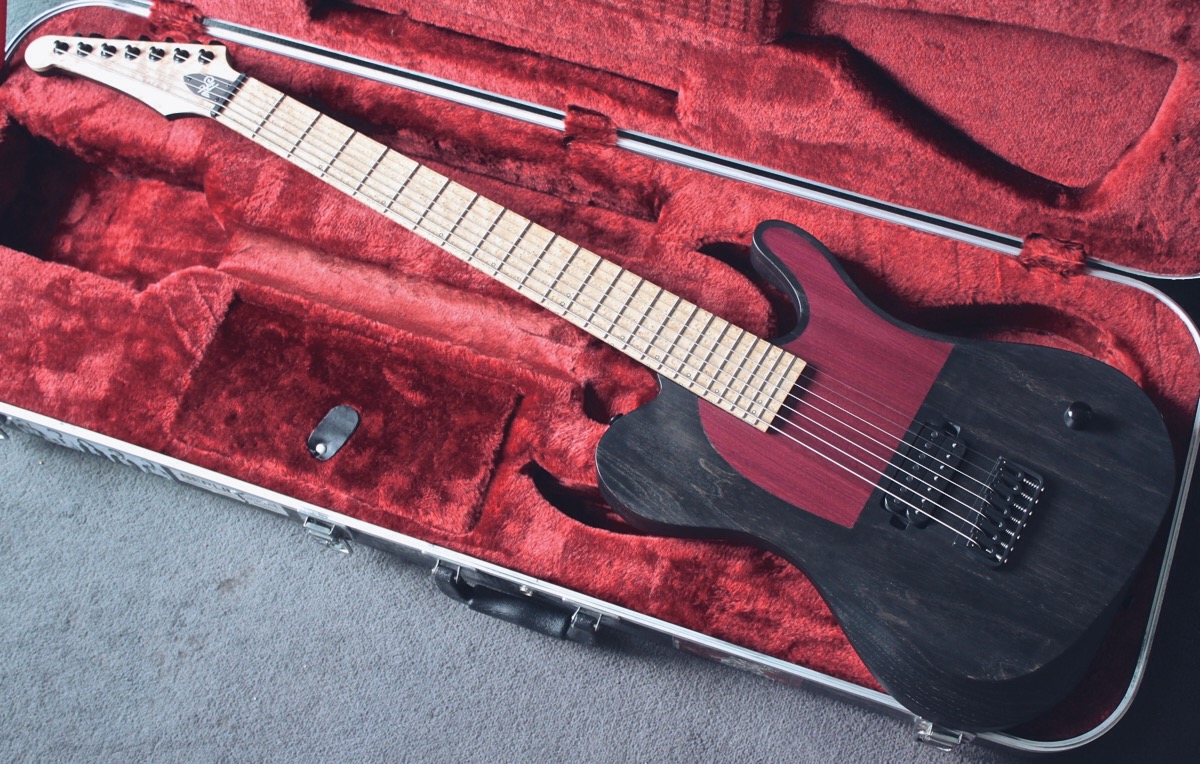 Speaking of classic Fender designs: When we talked about the headstock, I wanted him to come up with a reversed in-line and modern take on some classic Strat/Tele headstock key design features. What you see on this guitar is actually his first draft, he simply nailed it immediately!

Now a Telecaster is not exactly a very Metal looking shape, but the tweaks the Sludge comes with make it meaner than any Tele you’ve ever seen – the finish and forearm-contour especially. The latter reminds me of the Ibanez RGD series, which I’m a big fan of. The body itself is only 38mm thick, so the guitar is fairly light-weight. It’s definitely the least heavy guitar in my collection.

The hardware and electronics follow the same no bullshit approach. My Sludge has one pickup – the beastly Instrumental Pickups SFTY3 – a volume knob and a fixed Hipshot bridge. I simply wanted the best of both worlds: A straight forward Metal machine with a traditional twist. Done and done!

Now that we’re through with all the design details, let’s get to it – how does this thing play?! The neck of the Sludge is incredibly fast and feels like it will never get sticky, thanks to the very natural feeling oil finish on the wenge. I’d describe the profile as a very slim C. It doesn’t have pronounced shoulders like some Ibanez Wizard necks, for example. Speaking of Ibanez – the neck of the DCM100, my favorite Ibby neck so far, actually feels somewhat chunky after playing the Sludge. I’m not kidding. 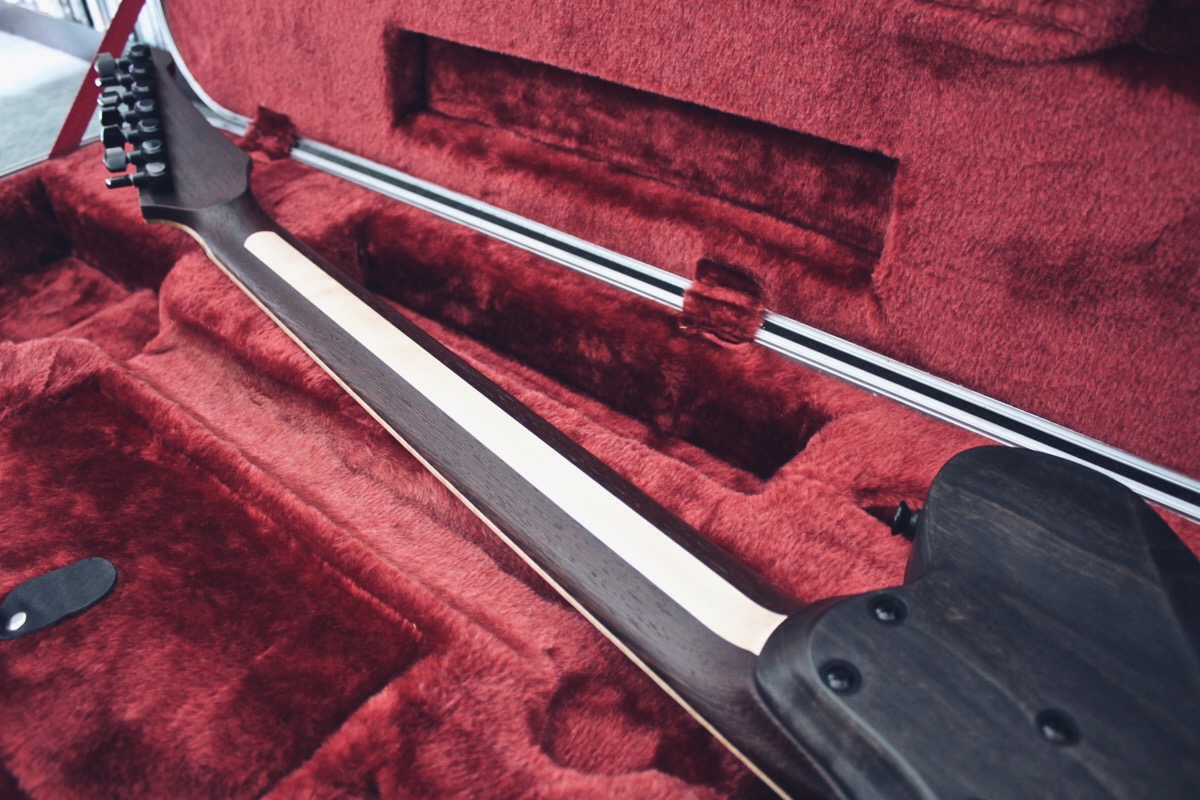 The action was set up comfortably low from the get-go. Not ridiculous, but just the way I like it. The guitar was PLEKed before I picked it up and I don’t understand the exact method to the madness that is the PLEK machine, but the frets are perfectly crowned, that’s for sure. The fretwork is spot-on – no sharp fret ends or anything. From all the guitars I’ve reviewed so far, I’ve only ever seen better fretwork once – on the Siggi Braun Griffith FF8 – but the Hapas is definitely a notch above Ibanez Prestige level fretwork.

Looking at the tonewoods I chose for this guitar, you may think it could sound brittle or way too hyped in the high end. Luckily that’s not the case. I chose these specs with very low tunings in mind – for a while, I actually wanted to tune it to F standard, like my 8-strings. I had it set up in G standard from Hapas Guitars, went back to dropped G# a few days after I received it, though. Simply because I feel more comfortable with this tuning on a 7-string.

You probably know of my Pickup Shootouts on Soundcloud, so you should also know that I have tried a ton of different Metal pickups throughout the years. The Instrumental Pickups SFTY3 is my favorite Metal pickup to date, hence the choice to go with it in my Sludge.

I took a slightly different approach to the clips this time, with the first clip featuring a newly edited tweak of my ERGLabs Kemper Profiles EVH 5150III through an Orange PPC412 rig (but no bass) and the second clip is comparing the Sludge with my trusty Ibanez RG2077XL, which is loaded with the exact same pickup!

I used D’Addario NYXL strings for these clips.

Here is where it gets tricky! It is almost impossible to judge this guitar like any other guitar I have reviewed so far. I am personally involved in the design of it and it obviously features the tonewoods, aesthetics, hardware and electronics I chose. So based on these things alone, how could it not live up to my requirements? If the quality wasn’t there, maybe. But that’s not the case.

Anyways, in terms of looks I simply asked Jörg how many points he would give the guitar and the score reflects the middle ground between both of our scores. The rest can only be judged by myself, but since I’ve been involved in the creation of this guitar to a certain agree, feel free to take my scores with a grain of salt.

The craftsmanship can be summarized with one word: Precision. The Hapas Sludge 727 is incredibly well-made and it’s a tough job trying to find any imperfections on it. There is one spot along the recessed pickguard where the finish is a little lighter than it is on most of the rest of the body (check photo number 5 in the gallery below) and the gaps between the the body and the pickguard vary by extremely minimal measures in some spots. Both of these things are extremely subtle and don’t bug met at all.

With all that being said, I am extremely happy with my Sludge. It came out exactly the way I imagined and the quality is absolutely amazing. It plays and sounds great as well.