Interview: We talked to Ola Englund about his Washburn Signature, his Randall Satan and his plans for 2015 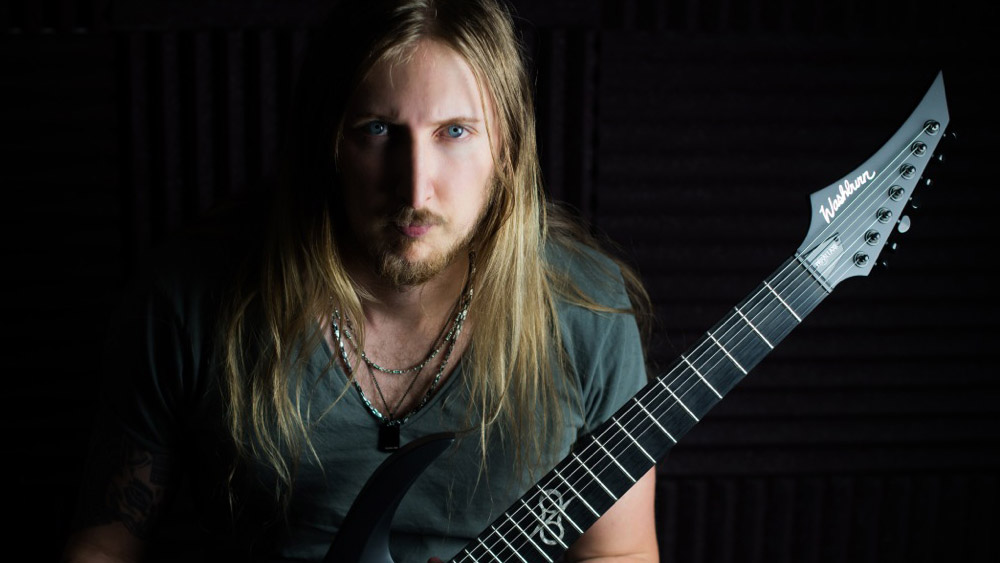 Ola Englund doesn’t need an introduction to the ERG-community. He played 7-strings for years for his infamous Gear-Demos on Youtube and in his band Feared.

His signature guitars, the Solar-models – which latest installment is being made by Washburn – are practically tailored for modern metal-guitarists.

We talked to Ola about said Signature-guitars, his signature-amp and his plans for 2015.

Congratulations on your newborn daughter and thank you so much for taking the time to do this interview with us. Did she already have her first guitar lesson?

Thank you, and no problem, things have been hectic but it’s finally panning out a bit, so I can start work again. But I’m loving every bit of being a father, it’s such a contrast to all the other things I do so it keeps my feet on the ground. Life just feels a lot easier when you’re looking into your daughters eyes. Ok sorry for derailing, I’m just very proud and happy right now. And no, I wont force her to play guitar. Now if she would be a singer though… Or drummer.

With The Haunted and Six Feet Under, you’ve mostly been using 6-strings lately, but you’re also currently working on the new Feared record. How is that coming along and what are you mainly using for the songwriting?

Actually you’re probably going to be disappointed about this, but the new Feared album is all 6-strings. I wanted a different dimension on this album rather than the Drop-A stuff I’ve been doing on the last couple of albums. So the tunings on this album are mostly Drop C or Standard C#.  And I’m very happy about the results, the sound is more hardcore and translates well to the songs. With that said, it’s not that I’ve stopped playing 7-strings, it’s just the challenge I wanted to do for this album. Who knows about the next one, maybe all 9-string guitar?! (nah)

Your Washburn Solar signature will be available across Europe this year and we hope to be able to review one here on ergnerds.com. Can you give us a little insight on what you wanted to achieve when designing and speccing it out? What makes the Solar guitar unique in your words?

I actually started to design the Solar 2.0 (as I would call it) way before joining Washburn. My friend Sylvain and I started to draw out the features and Sylvain made a mockup with the bevels. Washburn had been bugging me about trying out their Parallaxe series and while I was slightly sceptic, I tried the PXS20 and I fell in love with it. It was just a super easy playing guitar. I had just a lot of fun playing it. Then when I met with Washburn we worked out the features and details of the Solar. I wanted to have a simple no kinks metal guitar. Just something very simple and appealing to the eye. And of course I also wanted a couple with the Evertune. They made a couple of prototypes in different apperances and they all came out great.

To be honest I don’t play 8-string at all, with that said, we know people would like an Solar8 so we’re definitely considering it.

I often see people asking how to pursue possible endorsement deals on the basis of a YouTube channel with a few playthroughs and followers, rather than being in a band and playing lots of shows. Do you think the perception of how to become a successful musician and especially guitarist has changed because of your and others’ success as YouTubers?

Definitely, Youtube and social media is a new gateway for musicians to be seen or heard, a lot of bands have a chance to get exposure without much money or advertisement put into it. Problem today unlike when I started out, is the fact that the social media is oversaturated with bands and musicians who wants to be heard. The competition is hard and you have to really stand out to be seen. I think the reason I stood out in the crowd was because ONE, I was early with the gear tests, TWO I helped a lot of people with production questions and on forums. With that people started to value my opinion and listened to what I had to say. And while checking out my videos they heard my Feared songs. So it’ was indirect way of getting people to listen to my music by helping them out really. People are getting sick of the „hey check out my band“ -approach. So you would need to find a better approach to stand out. I think a lot of bands/musicians think it’s going to be an easy process to get acknowledged quickly, but it’s not. I started out from 2005 and forward with helping peope on forums to get my base followers.  But with that said, Youtube and Facebook is free at the moment so you should definitely do your best to utilize it in the best possible way. I see a lot of up and coming bands that totally go the youtube way and most of them are pretty fucking awesome to be honest!

By the way if you’re an up and coming musician and want to know what it takes to get endorsed you should read my FAQ answer on my website:

How do I get endorsed by XX brand:

This is a very common question I get and it’s not the easiest to answer but in short: If you want to be endorsed by a guitar brand or any gear brand in particular you have to have something that is valuable for the brand. It could be several things such as being a touring artist. That means being out touring and playing in front of a lot of people showing the gear in particular being used live. You can have a great following online, meaning you have a lot of people who value what you say or recommend. Do you have a blog, social media site with tons of visitors? Marketing competence? It all comes down to; how can you make money for the brand. Understanding this will definitely help you in your quest.

I consider every endorsement deal being a business partnership or relationship. I see it as me being employed by the brand in question, and I try to contribute in every way I can, video demoing, strategic planning, touring exposure, social media exposure, clinics/events etc. It’s not like I’m getting endorsed and just go laugh in my room with all the free shit I’m getting, I’m working hard to return the favor. Make yourself invaluable!

The gain control of your Randall Satan signature amp is rather sophisticated and controls different frequencies of the guitar signal individually. What’s the advantage of this seemingly complicated control layout – and is it really as complicated as it sounds?

It’s definitely not complicated, see it as a tool to build your type of distortion for your guitar or for your sound.

The Girth is a low frequency gain to shape the response of your low end before it hits the overall gain. You can either go from super tight to a more fuzzy type of bass in your tone. The grind is the high frequency gain and either smooths out the highs or if you want, go for a more aggressive super glassy high end. Once you get your head around how it works it makes a lot of sense.

First on my schedule is finishing up the Feared album and planning everything around its release, it’s a tedious process when you do everything yourself. But I like to work and I learn new things all the time.

After that I will do some touring with The Haunted and hopefully also work a bit more with my solo project Solar.  Maybe some more workshops and clinics. Who knows!

Thanks again for the interview, Ola.