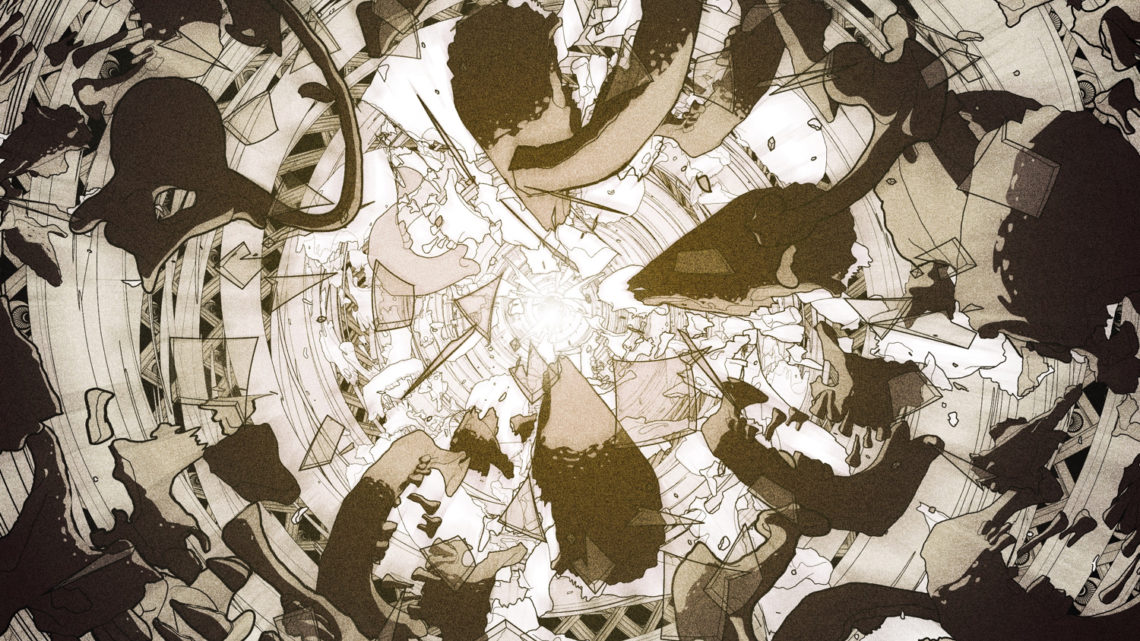 In my review of the ‘Chasm’ EP, I talked in great detail about the fact that I was really bummed when WFAHM called it quits in 2013 and also how much ‘Voyeur’ influenced me.

So of course Nightmarer – albeit being a completely different band – will be compared to Simon’s and Paul’s earlier work to some degree. At least from people who loved their output with WFAHM. And I’m no different in this case. Sorry guys! And with that being said, I might have to repeat a couple of things I already said about the mark that ‘Voyeur’ left with me and how it compared to the ‘Chasm’ EP for me personally, both musically and technically.

But first of all, let us first go over one of the most important things about ‘Cacophony of Terror’: The color of the vinyl.

And I’m not even completely kidding here. I got the limited “bruise” edition and while you could totally hate the music that’s on that LP, you’d still have to admire how absolutely beautiful (and fitting, but more on that later) this color is. Especially when you hold it against the light. Seriously, the vinyl itself is so astonishing that it renders the rest of the package somewhat uninteresting… 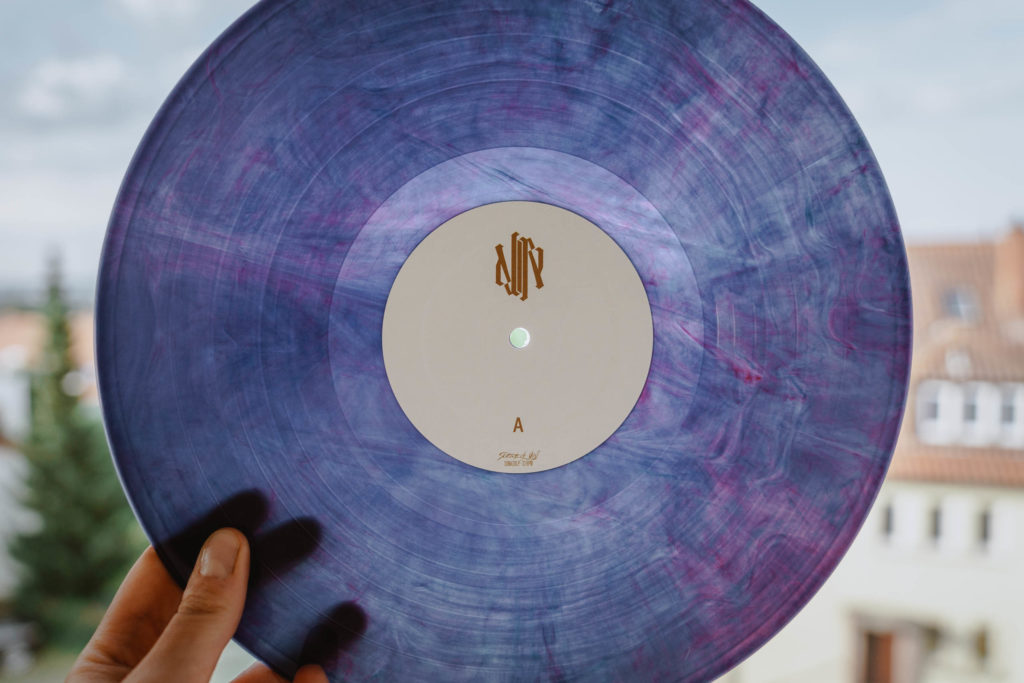 …which is good, because as much as I just raved about the vinyl, it doesn’t come in super-weird high grams or with spectacular die-cuts, like ‘Chasm’ did. And that’s fine, don’t be such a spoiled brat! Because …

…as long as you’re into Extreme Metal, you really want to put that bruised face-looking thing on your turntable and listen to this album. At least twice before you make up your mind about it, by the way.

The ‘Chasm’ EP worked for me right from the first time I put it on, because it showed off what kind of band Nightmarer was supposed to be in a matter of a few minutes. And with riffs and moments that stuck with me right away. The intro-riff for ‘Ceremony Of Control’, for example, is so simple, yet the sonic contrast of the notes alone was catchy enough to remember it forever.

The EP’s opening track ‘Vessel of Nausea’, with it’s haunting hookline, didn’t make it on the full-length, although I personally thought of it as the stronger track. Maybe it was a bit too close to WFAHM’s material to be considered for the album. Well, at least it has its place on the EP then.

What the EP did have was hooklines, though. Something to hold on to in an an otherways hopeless descent into sonic apocalypse.

‘Cacophony of Terror’ on the other hand? Not so much. Which will surely repel lots of WFAHM-fans. But after a couple of spins I can assure you, that that’s not a negative thing. By a big margin by the way.

Granted, ‘Cacophony of Terror’ is not exactly an easy record. It starts off interesting with the intro ‘The Descent’ and the awesomely named ‘Stahlwald’ as the first actual song. And both song titles combined pretty much describe, what you’re getting yourself into.

At around the 2:30 minute mark, ‘Cacophony of Terror’ shows its true, utterly ugly side all of a sudden. The claustrophobic, static noises halfway through the song pretty much sum up the fact, that everything that comes afterwards will sound like you’re hopelessly stranded deep in a very, very dark place within the Mountains of Madness. And vocalist John Collett is screaming down at you something so gruesome, that it feels like something H. P. Lovecraft could have written about it.

Speaking of which: While ‘Cacophony of Terror’ has an awesome, super raw and organic production overall – which may or may not irritate WFAHM-fans – the vocals definitely stand out and really make the record.

Switzerland-based mixer Raphaël Bovey gave John tons of room for his growls. While he’s not exactly showing a ton of variety, his vocals still give the feeling of a wider range. That guy is like a one-trick-pony on steroids, because who actually needs range when every syllable feels like a punch to the face?! With a hammer… ah, here we are again with the bruise-colored vinyl!

The third song ‘Skinner’ is the perfect summary of ‘Cacophony of Terror’, at least sound-wise. The song starts simple and stripped down, but before you know it, the guitars simply get out of hand. And that’s where Nightmarer really shine. These guys pretty much nailed how complex atonality coupled with simplicity can make for an utterly brutal, very extreme outcome. And all that without hiding less obvious influences like Godflesh and Celtic Frost.

The record continues to torture you in a similar manner over the course of 36 minutes, ultimately eclipsing in the amazing song double ‘Death’ (featuring the unhinged screams of Khanate’s Alan Dubin) and ‘Swansong’.

The narrative of an ending life and – at last – the relief of a battle coming to an end, paired with the eerie ECG beeps, leave me with a lump in my throat everytime I play the record. Not only because I can relate to Simon’s inspiration for the tracks (a dying relative), but because the songs really conveys deep emotion. Not exactly characteristics you often read about in an Extreme Metal review, but what the heck…

To be very clear: WFAHM-fans who „simply“ anticipated a follow-up to ‘Voyeur’ are going to be disappointed. And I am, too. A tiny bit. Because, and I’m not going to get tired of saying this, ‘Voyeur’ is a masterpiece.

So, let’s get this out of the way once and for all (and I’m mainly addressing myself here): Nightmarer is an entirely new beast. And a very huge one at that. It is mighty. And really, really scary. I’m serious!

‘Cacophony of Terror’ is pure darkness, yet full of contrasts. While the atonal, dissonant parts are what drives the record, the trio’s debut shines with sheer brutality in the most stripped down parts.

It is simultaneously simple and full of chaos. It is at times approachable, but – let’s face it – mostly repulsive, angry and grim. The production is awesome, but the record still sounds strikingly organic.

Nightmarer’s first LP is a pretty big blow to anyone who accidentally stated to like Extreme Metal in the past and will surely stir things up in an at times arrogant and small-minded genre. 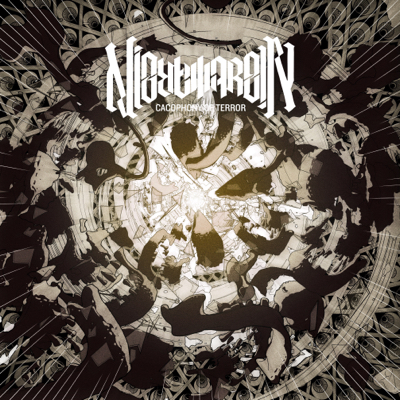