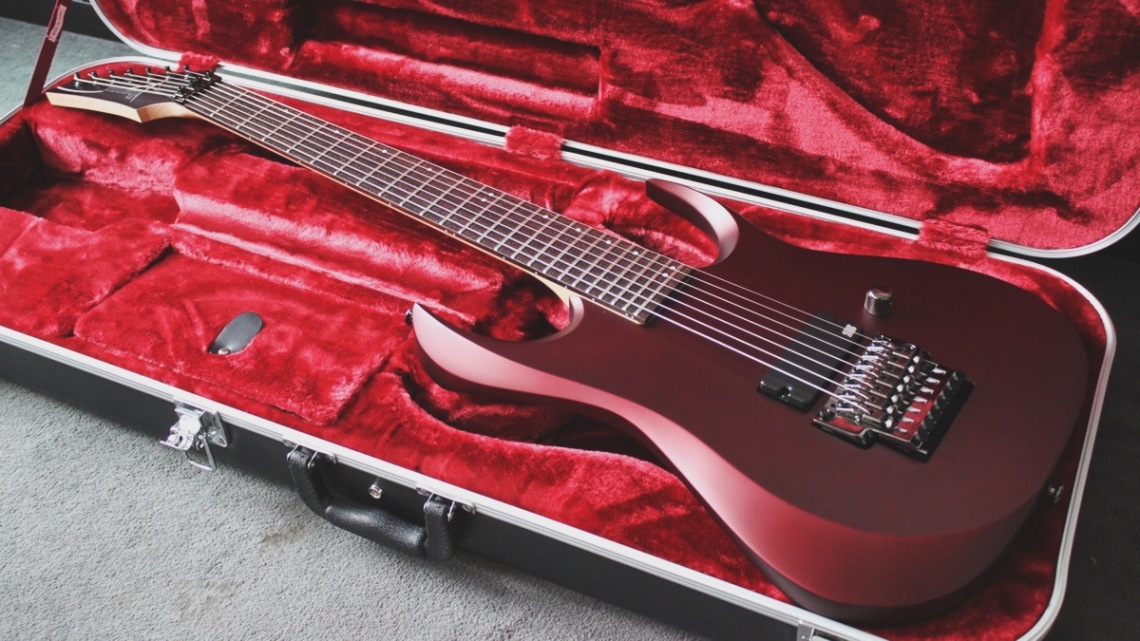 Back in the late 90s, Fear Factory were one of my earliest Metal discoveries. Their records ‘Demanufacture’ and ‘Obsolete’ were on constant rotation and Dino’s super tight staccato type of riffing actually piqued my interest in becoming a guitarist myself. So it’s safe to say that I wouldn’t have picked up the guitar at the time if it wasn’t for him. My second guitar ever was a 7-string already, but I couldn’t afford the Ibanez 7s at the time. I kept obsessing over their catalogs year after year and dreamed of once owning one. Meanwhile, I covered ‘Edgecrusher’ on a Cort VIVA7 live with my first band in the very early 2000s.

Years went by and not only did I end up owning a couple of Ibanez 7-strings, but I kept dreaming of a Dino Cazares signature Ibanez 7-string. And I wasn’t alone! A number of people kept asking for one to be released on various online forums. Time and time again, there were rumors of one being worked on and earlier this year the rumors finally turned into certainty: Ibanez announced the DCM100! It is based off of the RGD-shape, comes with a reversed headstock – an Ibanez 7-string fanboy’s wet dream – and is limited to only 100 units. So if you’re reading this now, chances are they’re already sold out. I was lucky enough to get my hands on one – I simply had to.

The DCM100 comes in a form-fit Ibanez Prestige hardshell case and the first thing that catches my attention upon opening it up is the finish. It’s a matte burgundy type of color and the light reflects nicely in the bevels of the body. As my eyes wander down the guitar, I notice the straight forward single pickup layout, the offset pearl inlays at the bottom of the slightly streaky rosewood fretbaord and – finally – the reversed headstock. Most Ibanez players love the reversed headstock design, but there only is a relatively small number of Ibbys with them out there. And cetrainly not a whole lot of 7-strings. The only other Ibanez 7 with a reversed headstock is the long discontinued Xiphos XPT707.

When I picked up the Dino sig for the first time I found it to be a bit heavier than my RGD2127FX, probably due to the mahagony body. It gives the guitar a very solid and indestructible feel. The same goes for the overall quality of the DCM100 – it’s obviously a very rigid, high end instrument. The craftsmanship absolutely lives up to the guitar’s price point and leaves nothing to be desired.

My favourite part of the DCM100 is the neck. It’s a 3-piece maple/bubinga/maple construction and boy, does it play good. I think I got lucky with the figuring of the bubinga, it’s quite streaky and the grain has a beautiful level of detail to it. I am a little bit surprised about the profile and thickness of the neck, though. From what I heard, Dino usually plays ultra thin necks, but the dimensions of his DCM neck design pretty much match the RGD2127’s, with maybe even rounder shoulders from what I can tell. It’s super comfortable and the back of the neck-finish only contributes to that. I’m wondering if it feels so incredibly smooth because the guitar is brand new or if they actually used the Velvet Touch-finish you usually find on the J.Custom series exclusively. Either way, the neck is an all around win. Do I even have to mention the quality of the fretwork? The magic word is “Prestige Fret Edge Treatment” – ’nuff said.

For his signature model, Dino chose a Lo-Pro Edge bridge. It’s not only a super solid unit but also the absolute favourite tremolo of lots of Ibanez fans, so I’d consider it a very good choice. I have had mine blocked from the factory and enjoy the tuning stability and precision of the double-locking system and fine tuners. The rest of the hardware is your typical hight quality Prestige/Gotoh stuff – tried and true. I swapped the tuning pegs for pearl ones on mine, but purely for cosmetic reasons. The factory setup was solid, but I lowered the action a little more and now the guitar practically plays itself. This is a fast guitar, shredders should love it!

Dino has been an active pickups player for years and was involved in the designing process of the EMG707 and Seymour Duncan Blackout. He’s been using the latter as an endorsee for quite a while now. But for the release of the DCM100, he designed the Seymour Duncan Retribution, his own signature pickup. I haven’t had a guitar with active pickups in years, so I was really curious about how I would like it.

I have to say that I’m not that impressed with it. While it’s not as compressed sounding as you would expect from an active, I’m still not bonding with it. The Retribution has a great single note attack and hard-hitting impact to it. But for me personally, the low end simply is a tad too thick. Or maybe I’m just a passive pickups player through and through? Either way, I don’t like it as much as many of the passive 7-string pickups I’ve been able to test so far. I will try a bunch of different active pickups for my 7-String Pickup Shootout in the future and will get a better idea of how it compares to other active pickups, though.

I did record two clips with the DCM100, so feel free to tune in and form your own opinion:

The Ibanez DCM100 comes with signature features, but not a signature guitar’s looks. If you didn’t know, there was no way of telling it was Dino’s model, at least without flipping the guitar over and spotting his signature on the electronics cavity cover. Nothing else about this guitar suggests that it’s an artist model – and I absolutely love the attitude behind the subtle design choices. You basically get an Ibanez RGD that is reduced to the max: A no bullshit single pickup layout, a unique finish and the much desired reversed headstock. All that is completed with awesome playability and Prestige quality. The only thing I’m personally not crazy about is the pickup, but as we all know, that’s always a matter of taste. It sure is more than capable of producing a hard-hitting, modern heavy Metal tone.

I can definitely recommend the DCM100 to any Metal guitarist, not only Fear Factory or Dino Cazares fans. If you have the cash and are quick enough to snatch one, you’re gonna be in rather exclusive company, thanks to only 100 units being available. We will see if a more mass-produced version will come out eventually, but I wouldn’t bet on it.