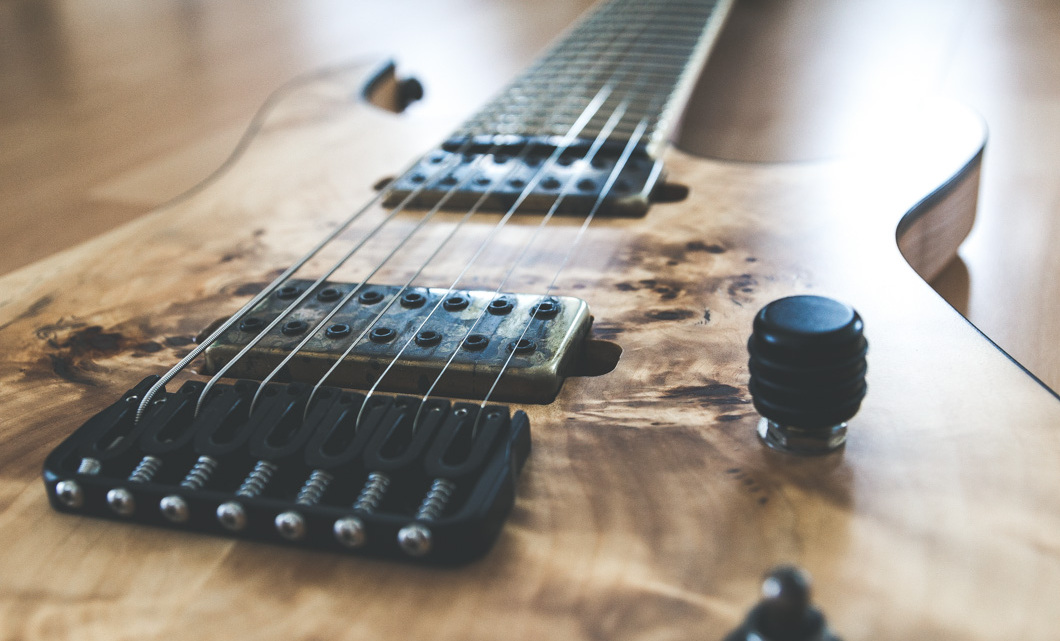 Was the hype too much to swallow for these sympathetic guys from poland?

Seriously, when did this whole custom-guitar-craze start? Can we blame Misha? Probably. Anyhow – I, too, felt the need to own a prestigious custom-ordered guitar in 2012.

Around that time the Skervesen-hype was already in full-motion over at sevenstring.org and I really liked their take on the Blackmachine-design with the claw-like headstock on their then-newest (and probably most successful) model, the “Raptor”.

Although I already was in contact with RAN and two luthiers from Germany at that time I hit up Maciek, the sympathetic guy over at the polish company who works out all the quotes and takes care of public relations. He quoted me a price of 1,800 € and a build-time of only 8 weeks. I literally placed my deposit the next day and it really only took 8 weeks for the Raptor to arrive at my doorstep. I also received various update-pictures throughout the build-process – a neat habit Skervesen seemingly broke since then.

So did the Raptor live up to its hype? Let’s see.

I received the Raptor with the memorable serial-no. “007” in a standard Rockcase (I believe they use Hiscox nowadays), in which the guitar barely fit – a baritone-Skervesen is a loooong instrument.

After opening the box, I was astonished. The Raptor had a very primal, yet classic look to it. And dat neck! Really, words don’t do it justice. The classic Skervesen wood-combination of Rosewood and ebony looks phenomenal.

So does the matte-finished burl-poplar-topped two-piece ash-body. I’m a sucker for details and so I especially liked the switch they used on my Raptor. It’s a kinda bulky 3-way-toggle and that bulkiness is exactly what makes it awesome on such a brutal-looking guitar. It’s like a gear-shift for a (tiny) tank!

Another awesome detail is the built-in string-dampener, which sits directly behind the nut. It’s definitely a more practical and more stealthy alternative to a GruvGear-Strap or – dare I say it? – a hairband.

The factory setup was perfect with an awesome low string-action, I actually had to get used to. The frets were rounded off very well and evenly and there was literally no fret-buzz going on.

Judging from pictures, the Raptor looked like a very light guitar to me. It wasn’t and I was honestly surprised by that. The guitar weighs a bit more than my Ibanez RGD2127Z, but it’s still comfortable. Despite the long neck the Raptor is a perfectly balanced instrument.

The beautiful neck is a bit chunkier than your regular slim-jim Ibanez neck and has a pronounced D-shaped profile. It feels comfortable, but I’d prefer it to be a bit rounder on the “shoulders”. Skervesen uses a very durable matte-finish that feels very dry, smooth and fast. The ebony-fretboard is beautiful with a few lighter, kinda cloudy streaks in it.

The hipshot-bridge – or better: The saddle of the B-string – on this particular guitar might have been a “lemon”. It has a slightly sharper edge than I’m accustomed to. I filed it down slighly and haven’t had a problem with it since. The open-gear locking-tuners of the same manufacturer are perfect though. I even prefer it to Schaller Locking-Tuners.

Unplugged the guitar sounds very percussive and extremely loud. Apparently that’s kind of a trademark for Skervesens. It also has a very pronounced midrange (especially in the higher registers). Combine that with the also very midrangey Bareknuckle Aftermaths and you’re going to have a bad time.

It sounds so different to all my other guitars that I had to rework every preset I used on my Axe-FX Standard beforehand. I talked to Maciek about that and he offered me replacements free of charge. That’s what I call customer service! I still ended up keeping the Bareknuckles, but they really had to grow on me. I’m still not a fan of them.

I ended up selling the guitar after 1 1/2 years of playing it under varying scenarios. I used it with my Axe-FX, after that with my Kemper and through a good ol’ 5150. Once I got used to its distinct sound, I thought of it as a reliable and – above all – beautiful guitar. I still had my problems with its sound, though.

Apart from that, I experienced a problem with the build-quality. The wood laminates in the neck kinda “grew apart”. The narrow ebony-stripes shrank, leaving a tiny “step” on the back of the neck. It didn’t really warp and it still sounded and played great. Those little humps were irritating, though. I talked to Maciek again and he offered to repair it free of charge again. He also suggested that I try to sand it down myself, to spare me the trouble of shipping it to Poland. I tried that first – and with a bit of elbow-grease, I was able to bring it back to its “former glory”.

During the time I owned the Raptor, Skervesen had to deal with a few customers who reported similar flaws on their guitars, insufficient quality control and a delayed completion of their orders. A few even complained about not getting regular build-updates, but come on … you never paid for that, did you? Every single problem (I know of) was dealt with, though. They either repaired the guitar for free or offered a discount.

In my opinion they were “overrun” by the hype and sadly couldn’t keep up. That’s a shame, because while I was in touch with them, they were always very nice, sympathetic and extremely helpful. I’d be pretty interested in trying one of the current builds – maybe we can get hold of one in the following months. 😉