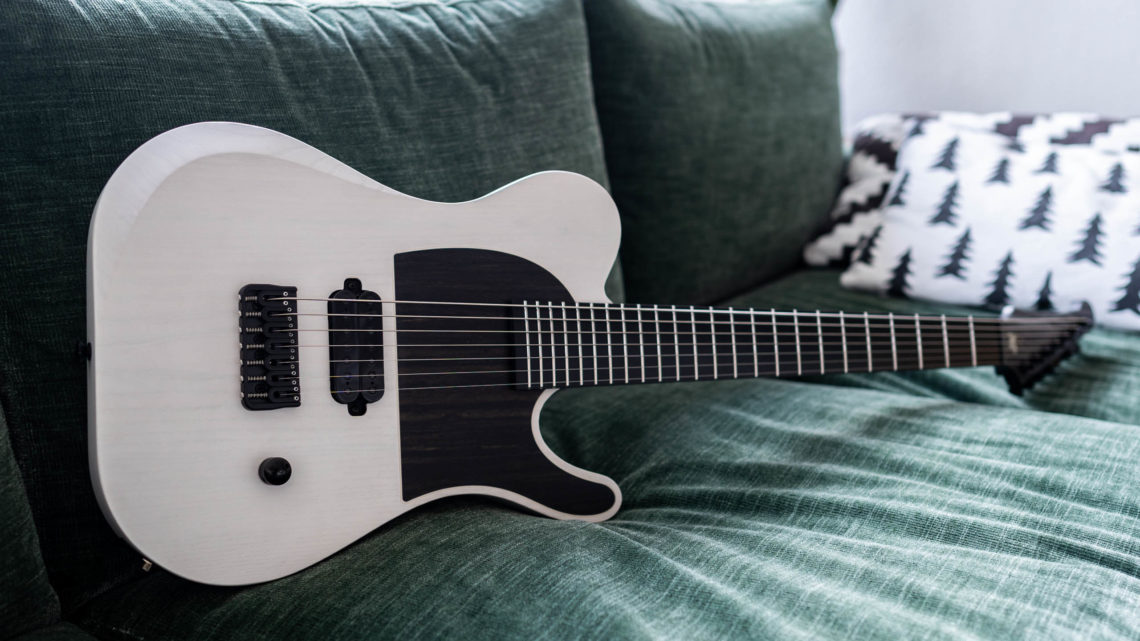 Since then, the Hapas guys have been able to get their guitars in the hands of a couple of very famous, talented people. Munky from KoRn has a Sludge 727 and Alex Wade from Whitechapel only recently got his Hapas Judge 727 – which is their modernized Jazzmaster interpretation, also co-designed with Simon.

So, what caused the stir? What makes Hapas guitars stand out?

At first: Nothing too obvious. The guys at Hapas build simple, stripped down, yet beautiful and meticulously crafted Workhorses. They even thought about a production line named WrkHrs, but that has been discontinued in the meantime.

But at this point, it should hit you: Who did this a couple of years ago, when Hapas really hit the market? No one. Well, not exactly. Ibanez gave in and released the famous, super hyped, super sought after and super expensive Meshuggah sig, the M8.

It was a beast. A tank. No compromise, no fancy crap, just playability, sound and a very brutalist look. You could say it was very, very Metal.

Guitarists all over the metal world were craving for something like that and only few manufacturers were willing to deliver back then. While the big players seemed to be a bit cautious, smaller shops were much quicker to respond to this new trend.

Kiesel, while being more known for flashy finishes, the most exotic wood combinations and even dyed fretboards, were one of those manufacturers who started to offer more and more of these simplistic instruments, like Simon‘s and my own DC7Xs.

And, well, Hapas really brought tons of new ideas to the table. The recessed, wooden pickguard for example, which is pretty much the most „flashy“ design choice you‘re able to make with their guitars to date.

Let me tell you, this simplicity has nothing to do with lack of craftsmanship. These guys absolutely know what they’re doing. Robert and Pawel intentionally create these stripped down, yet perfectly made instruments. It’s a design choice – Hapas Guitars’ identity.

As a big Telecaster fan, I‘m especially skeptic when it comes to modernized versions of one of my favorite guitar shapes ever. And luckily Simon is similarly particular about Teles, so it was one of the biggest priorities in the design process to get the shape of the body and headstock just right.

And they did get it right! The Sludge resembles the famous single cut without plain and simply copying the Fender classic. The body looks a little narrower, sleeker, somewhat daring…

Taking the Sludge 727 out of its case, I can immediately tell how much accuracy and precision the guys at Hapas put into their guitars. The arctic white paint job is stellar and please take a good look at that perfectly sculpted neck joint. And trust me on this one: It feels even better than it looks! The Richlite fretboard is a perfect alternative to ebony: Super dark, dense and rich in sound and color.

With the typically kinda squared off telecaster body design and the 27“ scale, the bridge naturally sits pretty far back on the body. Which makes for a pretty compact instrument for a baritone. That alone and the thin, flat D shaped neck with its smooth oil finish result in a super easy to play 7-string guitar. The neck actually feels comfortably narrow, as if you were playing a 6-string.

As you might have guessed by now, the fretjob is perfect. The guys at Hapas set up the guitar in drop A and they managed to get the action ridiculously low with virtually no fret buzz.

Now you might wonder if the Sludge has some serious neck dive due to the compact body design, the long scale and the somewhat elongated headstock, but I can assure you that nope, it’s honestly perfectly balanced! No neck dive, no worries.

I had a pretty good idea how the guitar would sound, having played and owned a lot of guitars with similar specs. But the Sludge was actually even snappier and more aggressive than I thought. I had to pull back treble quiet a bit in comparison to my DC7X.

Now, for one bolt on necks tend to have more attack of course, but Hapas’ own, hand-wound Bæhemoth pickup really prove to be an uncompromising power house here. And they allow you to boost the low end quite a bit, without getting muddy.

Holy smokes! I have to give it to the guys at Hapas: I expected a lot, but they really blew me away with the sheer quality of the Sludge I was honored to put to the test for a few weeks.

I already loved the modernized nod to the Telecaster, one of my favorite guitar shapes of all times, but I really learned to appreciate the Sludge holding it in my own two hands.

I’m pretty sure that sooner or later, I’ll have to call Robert and order my own Hapas – a Sludge or the new Judge model.

Quality-wise, it’s easily on par with the Jackson B7, the most perfectly built guitar I had in my hands to date. And it’s significantly cheaper, coming in at €1.999 at that.

But there’s one thing which you should have in mind: It’s not exactly a one trick pony, but in this configuration, the guitar is uncompromisingly catered to Metal players. Sure, swap the pickup and you might end up with a fiddle that can also do a tiny little bit of Jazz and the likes, but the rest of the guitar practically oozes aggressiveness … and that’s a good thing in my book!